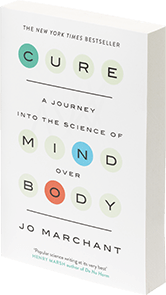 Cure: A journey into the science of mind over body

Cure begins with a simple question: can our minds really heal our bodies?

It is a controversial subject. The idea of ‘healing thoughts’ was long-ago hijacked by new age gurus and spiritual healers. But as this compelling new book shows, scientific researchers from a range of fields are now uncovering evidence that our subjective thoughts, emotions and beliefs can have very real benefits for our health, from easing symptoms and influencing immune responses to reducing our risk of getting ill in the first place.

In Cure, the award-winning science writer Jo Marchant travels a wide terrain of ideas – from hypnosis to meditation, from placebos to positive visualisation – rescuing each from the realm of pseudoscience. Drawing on the very latest research Jo discusses the potential – and the limitations – of the mind’s ability to influence our health, and explains how readers can make use of the findings in their own lives.

“A vivid, compassionate, generous exploration of the role of the human mind in both health and illness… full of human detail, integrity, and ultimately, hope.”  Deborah Blum, author of The Poisoner’s Handbook and Love at Goon Park

“This is popular science writing at its very best.”  Henry Marsh, author of Do No Harm: Stories of Life, Death, and Brain Surgery

“[Marchant] has chosen very moving characters to show us the importance of the research…and she has an equal flair for finding inspirational figures… the studies are irresistible.” New York Times

“A well-researched page-turner…raises questions about the role of culture, environment and neurochemistry in our responses to treatment—and may very well lead to widespread changes in the ways we practice medicine.” New York Post

“Should be compulsory reading for all young doctors.” New Scientist

“A thought-provoking exploration of how the mind can affect the body and can be harnessed to help treat physical illness.” The Economist

“A cautious, scrupulous investigation of how the brain can help heal our bodies.” Wall Street Journal

“[Marchant] surveys with grace what we think we know, and what we would like to know, about the mysterious and troubling relationship between our minds and our bodies.” The Guardian

“Cure is for anyone interested in a readable overview of recent findings in mind-body phenomena, a reliably enthralling topic… A rewarding read that seeks to separate the wishful and emotion-driven from the scientifically tested.” Washington Post

“[A] thought-provoking book… some remarkable findings, which Marchant analyses with elegance and lucidity… turns the mind-body debate on its head.” Times Literary Supplement

“Marchant is a skeptical, evidence-based reporter—one with a background in microbiology, no less—which makes for a fascinating juxtaposition against some of the alternative treatments she discusses.” New York Magazine

“Could my belief that I’m going to feel better in itself heal me? It’s a fascinating question, and one that British author Jo Marchant takes on with aplomb.” Spirituality & Health

“[A] well-researched study of ‘mind-body medicine.’ There is much compelling science here.” Nature

“A diligent and useful work that makes the case for ‘holistic’ medicine while warning against the snake-oil salesmen who have annexed that word for profit.” Sunday Times

“This is an important book, and one that will challenge those dismissive of efforts to investigate how our thoughts, emotions and beliefs might directly influence our physical wellbeing… intriguing and trailblazing.” Sydney Morning Herald

“A balanced, informative review of a controversial subject.” Kirkus Reviews

*** Cure is available in more than thirty languages. It is published in the UK by Canongate and in the US by Crown, and is available from all major retailers. In the UK, please click here to support local bookshops and purchase from Bookshop.org***