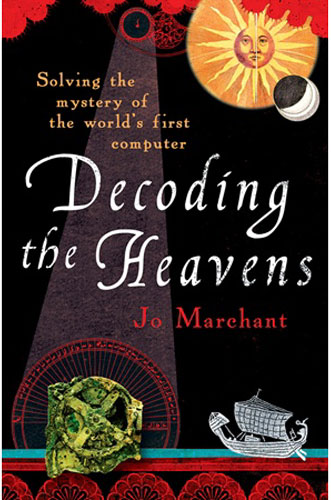 SHORTLISTED FOR THE ROYAL SOCIETY PRIZE FOR SCIENCE BOOKS 2009

In 1900 a group of sponge divers blown off course in the Mediterranean discovered an Ancient Greek shipwreck dating from around 70 BC.

Lying unnoticed for months amongst their hard-won haul was what appeared to be a formless lump of corroded rock. It turned out to be the most stunning scientific artefact we have from antiquity. For more than a century this ‘Antikythera mechanism‘ puzzled academics. It was ancient clockwork, unmatched in complexity for 1000 years – but who could have made it, and what was it for? Now, more than 2000 years after the device was lost at sea, scientists have pieced together its intricate workings and revealed its secrets.

In Decoding the Heavens, Jo Marchant tells the full story of the 100-year quest to understand this ancient computer. Along the way she unearths a diverse cast of remarkable characters – ranging from Archimedes to Jacques Cousteau – and explores the deep roots of modern technology not only in ancient Greece but in the Islamic world and medieval Europe too. At heart an epic adventure story, this is a book that challenges our assumptions about technology transfer over the ages while giving us fresh insights into history itself.

A dizzyingly brilliant thing…Whatever else it might once have told its creators, the Antikythera mechanism bears a chilling message for our technological age. The Telegraph

Sunken treasure. A mysterious artefact. Scrambled inscriptions. Warring academic egos. Technology 1,000 years before its time. The tale…sounds like pulp fiction. But it is all true. The Independent

Marchant blends the story of the Antikythera mechanism, the people bewitched by it, the 100-year race to understand it, with the history, chemistry, archaeology, astronomy, engineering behind it. The account is sprinkled with the magic dust of an Indiana Jones adventure. New Scientist

*** Decoding the Heavens is published in several countries including the UK (Windmill), US  (Da Capo), Germany (Rowohlt) and Greece (Travlos). In the UK, please support local bookshops by purchasing from Bookshop.org. ***