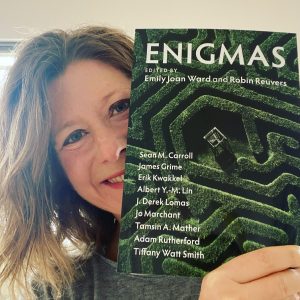 I was excited to receive my copy of the 2020 Darwin College Lectures today, it has been a long time! The series includes eight lectures on the theme of Enigmas, and I’m excited to be in the company of some wonderful lecturers including Sean Carroll (on mysteries of modern physics), Adam Rutherford (on human origins) and Tiffany Watt Smith (on emotions).

My lecture was on the Antikythera mechanism, and as well as including the latest research on how this pocket cosmos was made and where it came from, it gave me the chance to talk about how models like this helped to inspire and strengthen the overarching idea of the universe as a machine, that runs according to rules that we can measure, investigate and understand. This, I think, is ultimately why this device is so exciting and why it has continued to intrigue scholars and researchers for over a century. “Here, in these ancient, battered gearwheels, is an idea that changed humanity. It is a metaphor that became an entire philosophy, that sparked the birth of science and has shaped our modern worldview.”

All of the Enigmas lectures are available to watch online.