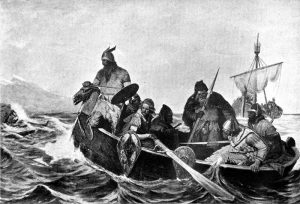 Scientists are studying a small crystal discovered on a sunken Elizabethan warship, to see whether it might have been used as an optical compass. In theory such a stone could have helped sailors to navigate during cloudy skies, particularly if their magnetic compasses were deflected by the huge metal cannons on board.

The ship dates from 1592 and was found in the 1970s, buried in a sandy cove just off the island of Alderney. Steve Wright of the Alderney Maritime Trust discovered the crystal on the wreck, next to a pair of navigation dividers. In a paper published today in Proceedings of the Royal Society A, Wright and colleagues led by Guy Ropars of the University of Rennes in France, have used spectroscopy to confirm that the stone is made of Iceland spar, a form of calcite.

Iceland spar is a polarising crystal, in other words it only lets through light in certain planes of polarisation. Historians have long argued over whether the Vikings in particular might have used such crystals to navigate, because of an intriguing passage in a Viking saga, written down in the thirteenth century.

“The weather was very cloudy, it was snowing. Holy Olaf, the king sent out somebody to look around, but there was no clear point in the sky. Then he asked Sigurd, to tell him, where the Sun was. After Sigurd complied, he grabbed a sunstone, looked at the sky and saw from where the light came, from which he guessed the position of the invisible Sun. It turned out, that Sigurd was right.”

Danish archaeologist Thorkild Ramskou suggested in 1967 that the sunstone described could have been a polarising crystal. Light from the Sun gets polarised as it passes through the Earth’s atmosphere, and holding the crystal up to the sky could in theory have allowed sailors to work out the Sun’s position even if it were obscured by clouds or fog, or was below the horizon.

I wrote in January 2011 about a review paper summarising studies on the properties of such crystals. Rennes and his colleagues published further analysis of a modern crystal in November 2011, with yet more in the current paper suggesting that it could have provided sailors with useful information about the Sun’s position. But of course showing that such stones could have been used in this way doesn’t mean that they were.

The Alderney crystal still doesn’t tell us anything about the Vikings, of course, but it’s the first such stone found associated with a ship, so represents the strongest evidence so far that such crystals were used in the past for navigation. In today’s paper, the authors have studied how the stone weathered during its four centuries underwater, in the hope that this might help the search for similar objects on Viking wrecks or burial sites.

I love the idea that what was once dismissed as a fanciful or magical tale might actually describe a real piece of ancient technology. It reminds me of the Roman author Cicero‘s description (in De Natura Deorum) in the first century BC of a sophisticated device “which at each revolution reproduces the same motion of the Sun, the Moon and the five planets which take place each day and night”.

Historians didn’t take it seriously until the discovery of the Antikythera mechanism, an ancient Greek clockwork machine that does exactly that (what, you mean you haven’t read my book about it?!)

It makes me wonder what other ancient stories and myths we might be able to take literally after all. Some scholars interpret historical accounts of the siege of Syracuse to mean that Archimedes invented a solar-powered steam cannon. I’m not convinced. Instead I’m rooting for a Chinese legend dating from 2600 BC, which says that the Yellow Emperor Huang Di had a chariot topped with a wooden figure that always pointed south. Historians of technology have speculated that this might have been achieved by a differential gear, which could have subtracted the revolutions of one wheel from the other, thus keeping track of any changes in direction.